Name of the tour: Valencia – City of Arts and Sciences and Fallas Museum daily tour.

Description: This is a 2-hour guided walking tour to the most avant-garde architectural complex in Valencia and museum of the main Valencian festival. The City of Arts and Sciences is the work of two Spanish architects: Santiago Calatrava and Felix Candela. A true prodigy of futuristic architecture of the 21-st Century. The Reina Sofía Palace of Arts, which is the Opera of Valencia, the Prince Felipe Science Museum, the Umbracle Gardens where the most chic Valencian nightclub is located, so called Hemispheric which holds inside real IMAX Cinema and finally an Agora Event Hall. The complex was filming location of the Disney movie Tomorrowland with George Clooney as the main character and the third season of HBO’s Westworld with Thandie Newton among other cast members.

Fallas Museum of Valencia is dedicated to the main local festival – so called “Las Fallas”. In 2016 “Las Fallas” festival was declared Intangible Cultural Heritage by UNESCO. The museum contains the figures (aka “ninots”) that were saved from fire on the last night of the festival officially called “la nit de la cremà” which literally means “the night of fire”. It is the night from 19-th to 20-th of March when all Fallas monuments are burned with the exception of only two figures (aka “ninots”). One of them belongs to the Big Fallas and the other to the Children’s Fallas. The museum has an impressive collection of the “ninots” saved from fire from 1934 to the present day.

Language: English, Spanish and Russian. The guide is doing the tour only in one language.

Type of the tour: Scheduled and shared walking tour.

Days: Daily from Monday to Saturday.

Entrance tickets: Yes, included in the price of tour.

Groups: For the groups of more than 6 people we advise private booking of this tour. In that case we can establish different meeting time, place and duration.

Booking: is necessary in advance. You can do it by email info@discovering-valencia.com or by WhatsApp +34 687025082 / +34 607360343. Once you booked the tour, please recheck our confirmation. Also you can buy this tour directly at any Tourist Info Office in Valencia. There are 5 of them located at: Plaza del Ayuntamiento nº1; Calle de la Paz nº48; Paseo de Neptuno nº2; Joaquin Sorolla Railway Station and in Valencian Airport. 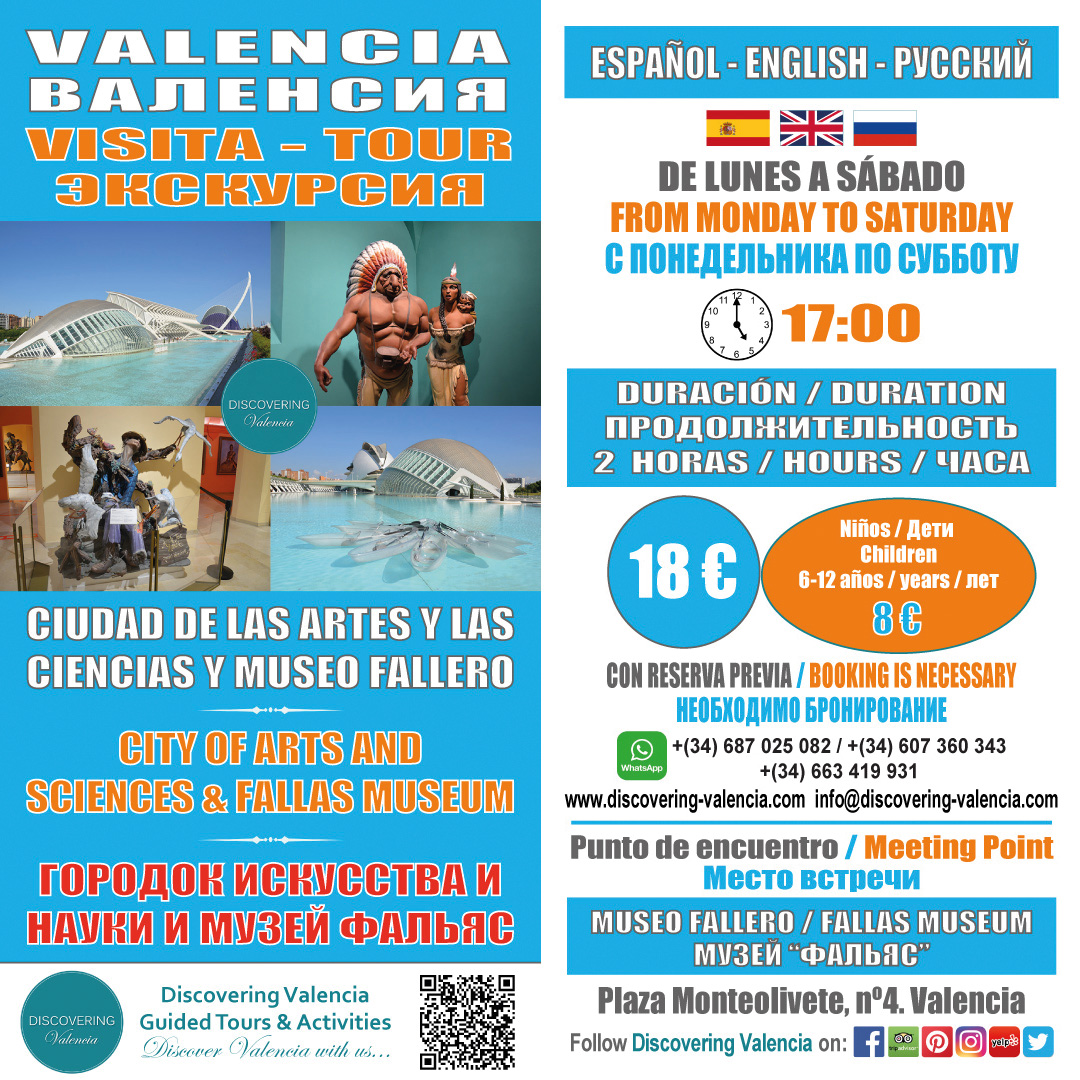 Accessibility: this tour is accessible for the wheelchair users. Please just keep in mind that more people may participate in this tour, so you should be able to move in the same time with the whole group. If you feel you need any kind of specific attention or you are moving very slowly, please check with us the possibility to book this tour on private basis.

Children: we recommend this tour for the families with children.

Suggestions: this tour is walking only, so comfortable cloth and footwear is very advisable. During the summer period we advising using appropriate sun protection.

COVID-19 safety measures: please don’t forget to bring your face mask and antiseptic hand gel. Our guides are always using their own mask and hand gel. Please keep in mind we are not providing masks or gel to our customers.

Our company is certified by Spanish State Secretariat of Tourism as Responsible Tourism Company. This certification means we are strictly following the Guidelines on Measures to Reduce the Spread of the SARS-CoV-2 Coronavirus in the Tourism Sector.